Anyone who has taken up the art of market watching over the last ten years may have noticed that breweries, micro-breweries and brewpubs have more than tripled the craft brewing market and placed most U.S. living quarters within 10 miles of a craft brewer. With Millennials accounting for 41% of the weekly beer-drinking population, the industry will continue to affect local and national real estate, as well as the economy.

Many brewing facilities are currently operating out of abandoned mills and vacant manufacturing spaces, as well as in redeveloped, archaic brew shops — in other words, reclaimed space, such as Millennial Brewing Company and Scotty’s Bierwerks’.

Additionally, the craft brew space in Southwest Florida is split by retail and industrial space, with much of the retail space for breweries located in retail strip centers, such as Bury Me Brewing Company, Bone Hook Brewing Company, Old Soul Brewing and Point Ybel Brewing Company.

Nearly 75% of tracked U.S. brewpub deals have also become a part of retail or commercial space, while microbreweries and regional craft brewing operations have mostly been tenants of industrial space. This translates to over 55.6 million square feet of occupancy growth across industrial (81.4%) and retail (18.6%) space as of 2007.

Within the State of Florida, there were a total of 195 breweries by the end of 2016, which suggests a 333.3% change in brewery growth since 2011 and translates to 1.3 breweries per capita. Over 1,200 barrels of craft beer per year are produced statewide, translating to 2.5 gallons per 21-plus adult. 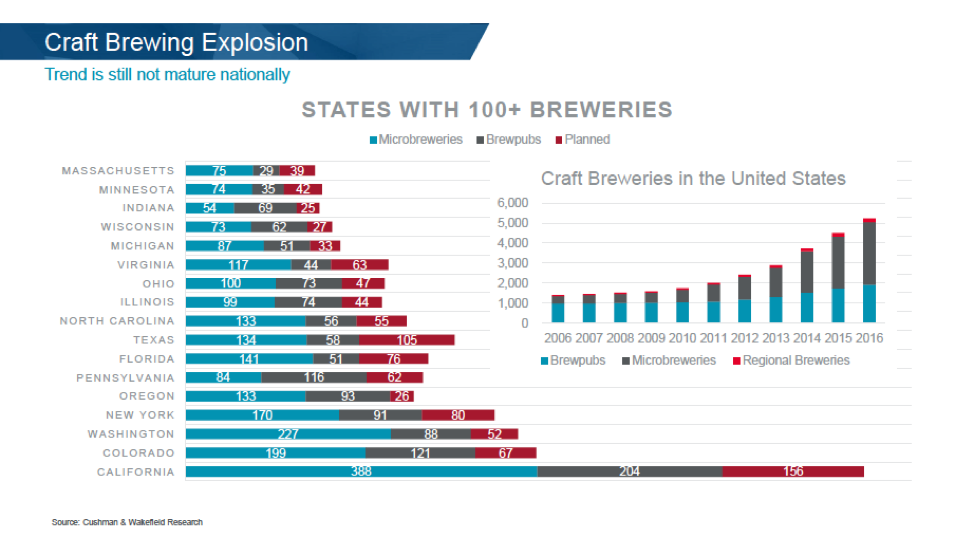 Ironically, five-plus years ago represented a time of zero breweries in Southwest Florida. But right now, there are 14 from Punta Gorda to Marco Island. Here is a look at local market indicators:

Will this Trend Decline?

The double-digit growth of individual markets may decline in 12 to 18 months, resulting in the closing of some breweries, largely in the markets where the trend has already proven to be strongest, because that is where the fiercest competition lies.

Even so, small brewpubs, microbrewery operators and larger, regional players are continuing to multiply, especially as they expand to tasting rooms, full pubs and/or restaurants, as well as wedding and event venues. Additionally, more startups, private-equity funds and big beer conglomerates are looking to get a piece of the craft beer market.

As aggregate craft beer production increases, these producers will be looking for outlets to expand their markets. Along with the potential to wholesale direct to local restaurants and bars, we see a new concept emerging. Tap houses that feature multiple products will be another potential outlet. One such concept, slated to open in early 2018, is Marlins Brew House. Here, patrons can choose from a rotating 32-tap inventory of local craft beers. Watch for Marlins Brew House and likeminded tap houses to expand rapidly throughout the region and beyond.

How Do the Strong Survive?

Prospective brewers should enter the craft beer market with a solid concept in place to ensure proper capital and space. This includes an executed lease before receiving approval for alcohol sales, because landlords will not take a chance on tying up a property without confidence in a business plan. Operators should also understand how local regulations may impact their business plan and have the necessary clauses written into their lease. Additionally, to connect with the Millennial consumer base, material goods should never take priority over experiences.

The real estate and the design matters much more than how many taps one owns. Start by picking the right location. Just watch out for plug-and-play leases in otherwise nondescript second generation retail space.

Then, invest in innovative design and architecture to stand out from the competition. This should include open spaces for live music, film screenings and/or backyard-style games for a family-friendly environment. And remember to seek partnerships with restaurateurs including food truck operators. This will allow brewers to focus on their craft, while potentially keeping customers in their space longer, driving beer sales up.